It looks like the mask is going to be around for awhile~~so why not be fashionable? The color on the fabric is just beautiful—it makes wearing a mask almost fun.

Right now, as I wear a mask daily, these TisAD masks are saving my sanity. These are amazingly comfortable. They are not itchy. They are not hot. They are breathable and big enough to go over my nose to below my chin. They are gorgeous. I bought all of them. They are the only masks that I have found that are a pleasure to wear all day long.

Rhonda, this is the best review we ever had about our masks! We are so happy that you love them! Thank you so much!

The masks were gifts to my adult children since they are fellow lovers of art like me. They LOVED them, despite the underlying reason for them. The colors were vibrant, too. So beautiful and well-made! Thank you for providing these pretty replicas! I’m an art history fan forever!

Thank you Kate! We hope our masks won't be used for long. In the meantime, we're so glad you and your family love them!

Loved the design and their sturdiness.

M
Marcia Blackburn
I LOVE my Van Gogh mask from This is Art Day!

The print is vibrant and the fabric is soft. 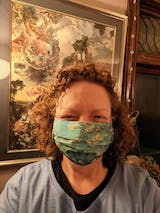 Thank you Marcia! Love the pic!

The world as it is at the moment seems perfectly captured with hopeful sadness of starry night as a mask .

Thank you John! We hope these masks are only temporary... :)

Back to Last Chance