I bought several pins from Today is Art Day and this is my favorite! She’s beautiful and great quality (they all are) and really captures the original work. I will be back for more!

I've been pleased with Today is Art Day each time I visit to purchase gifts. When I saw the Birth of Venus pin I knew it was perfect and knew from previous goodies found here that it would be excellent quality and it is. I couldn't buy just one item and am pleased with the pins and stickers I got on this shopping trip. Shipping is always fast and secure. Today is Art Day always pulls through with the best product ~ diverse selection, vibrant colors, resonably priced, and top quality. Thank you!! 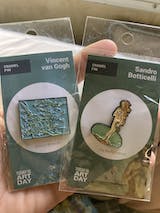