I had a plan to make an art jacket. A thrift store provided an Armani jacket for $1.70. Not a perfect fit, but it suited my needs. Today Is Art Day had a whole range of colorful, well-made patches to make me a walking gallery! 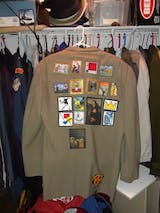