It even glows in the dark!

This is a nice card for any Van Gogh Starry Night fan. 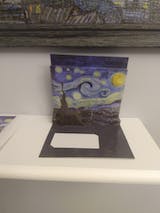 Love it. Am sending it to my daughter for her birthday so I won't be able to see her reaction. I know she'll love it because she loves that particular picture and for years I have found jewelry, purses, umbrellas, etc., with that scene. So glad I found your card. Just wish I could see her face when she opens it....

Cool little 3-D Art Piece that we used as the backdrop for our Van Gogh figure to stand "in" for display purposes.

I’m so amazed by the clever products that can be found online these days. This card is one example of someone’s creativity~~and the ability to make someone smile and marvel at the site of any of the cards from this company~it’s priceless!!

12
Back to Cards
English