The action figure is 5 inches tall and made of PVC.

WARNING: CHOKING HAZARD. Small parts. This is not a toy. It is not designed nor intended for, children under the age of 12.

Looks great. It’s well made and I got it quickly!

Thank you Chris for this Surrealist purchase! ;)

C
Camélie Roy
In love with my Magritte!

I cannot express how much I am in love with my beautiful figurine of Magritte! It fits perfectly my decor. It gives me some everyday art when I work, it warms my heart. The figurine is solid and don't fall, it is stable. I would recommand! I have almost all the other figurines as well, they are all perfect! 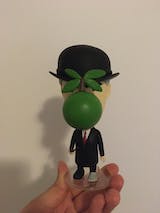 It warms our heart to read this review! Thank you Camélie!

My daughter falls in love to all of figures by “Today is art day”.

Thank you Nataliia! Your daughter has great taste! ;)