I love this little Vincent magnet. It is so cute and the raised outlines make it look more like the actual painting. 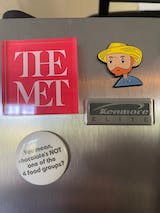