I ended up with 2 starry night pins, but the one from you guys is the best. Little pieces of art can add up to an impressive collection. Can you see how many of yours I have? I think I’m addicted. 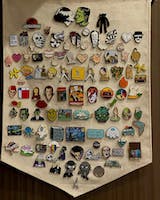 This is such a nice collection Kate! Thank you so much for sharing this picture with us. There are so many from our line of pins! Love it! :D